I am outraged that Oakland police killed Hernan Jaramillo and kept the truth about his death quiet for more than two years. Jaramillo’s family called the police for help. Instead, they killed him, ignoring pleas from Jaramillo and his family to stop before it was too late.

Every officer on the scene that night is responsible for Jaramillo’s death. Each officer present either participated in killing Jaramillo, or watched him die and did nothing to intervene. It is shameful that Oakland police kept the video of Jaramillo’s death out of the public eye.

About a year after Jaramillo’s death, Staten Island police killed Eric Garner in a shockingly similar incident. The video of Jaramillo’s death, if made public in a timely manner, would have created an important public conversation about police use of force, and likely made officers think twice about what they were doing as they kneeled on Garner’s back and ignored his cries of “I can’t breathe.” Timely information about Jaramillo’s death also would have given Oakland residents an opportunity to demand much needed changes to the city’s policing practices.

I demand that you immediately fire the officers present at Jaramillo’s death and ensure they are prosecuted to the fullest extent of the law. I’m calling on you to institute new policies that require an investigation into any death at the hands of police, and mandate the timely public release of videos and other evidence in officer-involved killings. Finally, I demand that you immediately start answering questions from the media about the Oakland Police Department’s response to Jaramillo’s death.

Too often, the police treat Latinos, Black people, and other people of color like second class citizens. Continued silence from the Oakland Police Department regarding the death of Hernan Jaramillo sends the dangerous message that the police do not value our lives. 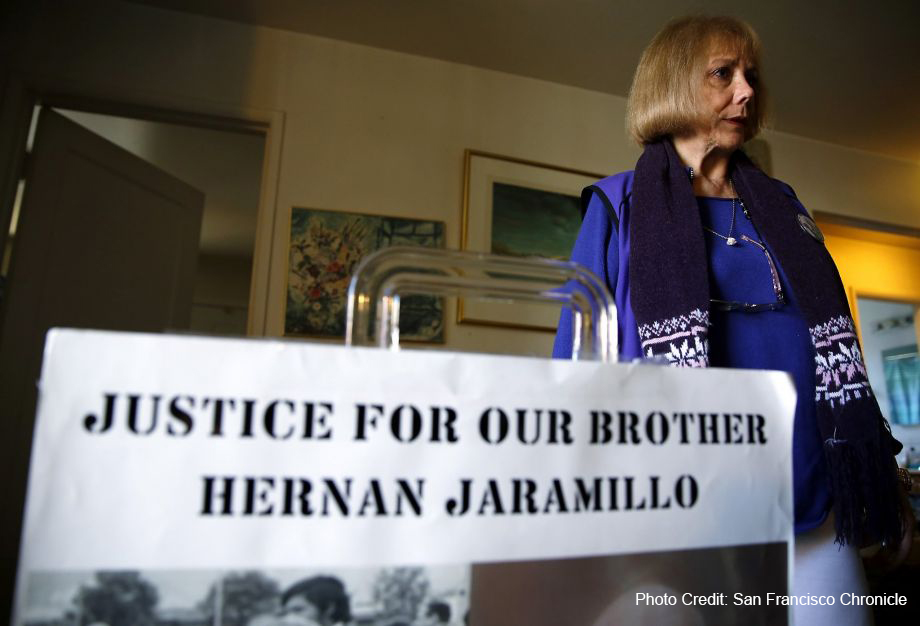 “I can’t breathe…they’re killing me.” That’s what 51-year-old Hernan Jaramillo said over and over while police kneeled on his back, ignored his pleas for help, and watched him die.

It was all caught on video. But it took more than two years for the video to come out – only when an inside source finally leaked it to the media. If it were up to the police and Oakland authorities, we might never have known what happened. Now, they won’t say whether there was an internal investigation into Jaramillo’s death, or whether any of the officers involved were disciplined. In fact, they’re refusing to answer any questions about his death at all.

Hernan Jaramillo worked as a realtor for years, lost his job after the economy crashed in 2008, then went back to school. When police killed him, he was living with his older sister and working as a salesman for a local solar panel company. Jaramillo was never accused of committing a crime and had no criminal record. His sister called the police for help, because she thought her brother was in danger. But instead of helping Jaramillo and his family, the police killed him – then kept the truth about his death quiet for two years.

It’s completely outrageous, and we can’t let them get away with it. We demand that the officers who killed Hernan Jaramillo be fired and prosecuted. We also demand that all police killings are automatically investigated, and that evidence like the bodycam video of Jaramillo’s death gets released to the public quickly.

Too often, the police treat Latinos, Black people, and other people of color like second class citizens. Please join us in demanding justice.