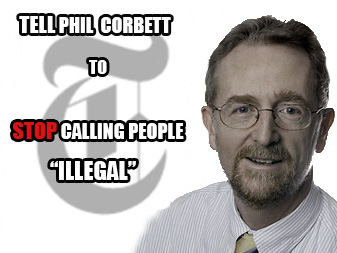 For the first time in decades, we have a chance to change the way the media talks about immigration. Pulitzer Prize-winning undocumented journalist Jose Antonio Vargas has put a lot of pressure on The New York Times in recent weeks to stop dehumanizing immigrants.

ABC, NBC, CNN, The Huffington Post, The Miami Herald, and many other news agencies have already stopped describing human beings as "illegal." Journalists within The New York Times have publicly voiced their disagreement with their own newspaper's policy on the term. Even Fox News Latino uses the word "undocumented" instead of "illegal."

UPDATE I: The Associated Press just dropped the I-word and The New York Times is considering changes. Now is the time to push. Can we get 10,000 people to tell the NYT to stop calling people "illegal?"