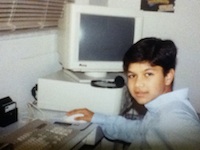 Another DREAM Act Student in Deportation

Shamir Amirali Ali was picked up during a workplace raid yesterday and was taken into custody by immigration. He is a kind and humble leader and his dream has always been to go to college. Shamir can be deported to Bangladesh as early as today because of a previous deportation order.

Since yesterday, he has been transferred to an immigrant jail and now awaits his deportation to Bangladesh, a place he left as a young child. His only hope is if enough people stand up against his unjust deportation. Please take a moment to sign this petition for the immediate release and cancelation of Shamir's deportation.